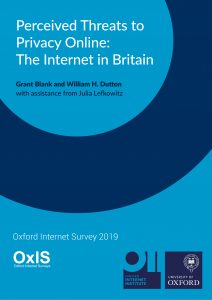 Research from the Oxford Internet Institute (OII), part of the University of Oxford, has revealed a rapid increase in use of the internet for commercial, banking and entertainment purposes. The number of people paying bills online, watching films and TV series’ and streaming music via the internet has increased significantly since 2013.

However, there is a growing divide in experience and perception between those who use the internet and those who do not, which could lead to non-users potentially missing out on access to key services, widening the “digital divide”.

The findings of the 2019 Oxford Internet Survey (OxIS) show that while harmful experiences on the internet like viruses or theft of credit card details have not increased, 72% of non-internet users believe the internet threatens privacy, compared to 52% of those who actually use the internet.

“The majority of people are having positive experiences of internet use, regularly going online to watch their favourite shows or pay their utility bills.

“However there is a widening perception gap between internet users and non-users, with non-users resolutely avoiding the internet. Often these non-users are from low income groups, where being online could potentially improve their quality of life.

“There’s an interesting paradox here with internet users being less likely to take action to protect their privacy while non-users tend to be put off by privacy concerns. These concerns could perpetuate the digital divide, with many people missing out on the benefits of the internet, such as access to health information, employment opportunities and reduced prices online.

“There is a real opportunity to engage with non-users to address their concerns and help them understand the opportunities the internet can bring. We hope this survey contributes to the public debate about what further steps can be taken to narrow the digital divide.”

The Oxford Internet Survey 2019 is sponsored by the Department for Digital, Culture, Media and Sport (DCMS), BT and Google.

“It is great to see an increasing number of people are reaping the huge benefits of being online. From paying bills, streaming their favourite songs to connecting with friends and family across the globe.

“To help more people get online we launched our £400,000 Digital Inclusion Fund to help older and disabled people get online and acquire new digital skills. Through our Digital Skills Partnership we are continuing to work with our partners across the public, private and charity sectors to boost people’s capability and confidence in a collaborative way so everyone can benefit from our world-leading digital economy.”

“Helping motivate people who lack confidence to get online is essential to bridge the digital divide. BT is passionate about building people’s digital skills and helping them to navigate new technologies to improve their lives and drive better productivity for the UK economy.”

Commercial and leisure use of the internet

Reasons for not being online

The OxIS 2019 survey is the seventh in a series, with previous surveys carried out in 2003, 2005, 2007, 2009, 2011 and 2013. Each survey has used a multi-stage national probability sample of about 2000 people in Britain. Launched by the Oxford Internet Institute (OII) in 2003, OxIS is the only ongoing survey of internet use in Britain. OxIS provides the UK contribution to the World Internet Project (WIP), an international collaborative project that joins over two dozen nations in studies of the social, economic and political implications of the Internet.

About the Oxford Internet Institute (OII)

The Oxford Internet Institute (OII) is a multidisciplinary research and teaching department of the University of Oxford, dedicated to the social science of the Internet. Drawing from many different disciplines, the OII works to understand how individual and collective behaviour online shapes our social, economic and political world. Since its founding in 2001, research from the OII has had a significant impact on policy debate, formulation and implementation around the globe, as well as a secondary impact on people’s wellbeing, safety and understanding. The OII takes a cross-disciplinary approach to tackling society’s big questions, with the aim of positively shaping the development of the digital world for the public good.

Connecting OxIS with the Census

Digital inequality means some local economies in Britain are disadvantaged. Combining OxIS data with the census can reveal for the first time the local patterns of digital inequality across Britain.

Linking OxIS with data from the census and the NHS provides insights into the relationship between Internet use and healthcare outcomes: which can be mapped at the local area level.

You can find out more about which cookies we are using or switch them off in settings.

This website uses cookies so that we can provide you with the best user experience possible. Cookie information is stored in your browser and performs functions such as recognising you when you return to our website and helping our team to understand which sections of the website you find most interesting and useful.

Strictly Necessary Cookie should be enabled at all times so that we can save your preferences for cookie settings.

If you disable this cookie, we will not be able to save your preferences. This means that every time you visit this website you will need to enable or disable cookies again.

These cookies will remain on your computer for 365 days, but you can edit your preferences at any time through the "Cookie Settings" in the website footer.

Please enable Strictly Necessary Cookies first so that we can save your preferences!

This website uses Google Tags and Google Analytics to collect anonymised information such as the number of visitors to the site, and the most popular pages. Keeping these cookies enabled helps the OII improve our website.

Please enable Strictly Necessary Cookies first so that we can save your preferences!